Camptothecin & Its Derivatives for Cancer Therapy

Camptothecin (CPT) is a pentacycle quinoline alkaloid that was basically isolated from woody plant Camptotheca acuminata. Due to their selectivity as topoisomerase I inhibitors that trap topoisomerase I cleavage complexes, camptothecin and its derivatives are promising anti-cancer drugs.

From 1967 to 1970, researchers found that this pentacyclic monoterpene alkaloid showed strong antitumor activity in vitro against Hela cells (a cell line of cervical cancer cells), L1210 cells (mouse lymphocytic leukemia cells) and rodents, and also showed efficacy against a variety of malignancies such as gastric cancer, rectal cancer and leukemia. This triggered a wave of scientific research on the plant Camptothecin and Camptothecin-like compounds, and more and more Camptothecin-like compounds were discovered one after another. However, for many reasons, the clinical application of camptothecin has not been effectively advanced.

In 1985, Hsiang and his colleagues discovered that camptothecin and its derivatives target Topoisomerase I and reversibly bind through the TopoI-DNA cleavable complex, forming a CPT-Topo I-DNA ternary complex that inhibits DNA replication and transcription, which in turn leads to cancer cell death. Compared with TopoII inhibitors, Topo I inhibitors are highly potent and have a broad anti-tumor spectrum, and the specific inhibition of Topoisomerase I by camptothecin has triggered a new wave of interest. 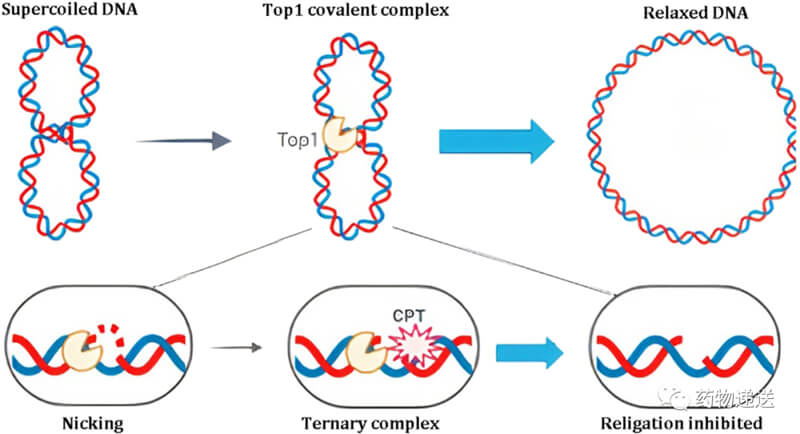 Camptothecin has a planar pentacyclic ring structure, that includes a pyrrolo[3,4-β]-quinoline moiety (rings A, B and C), conjugated pyridone moiety (ring D) and one chiral center at position 20 within the alpha-hydroxy lactone ring with (S) configuration (the E-ring).

There are three main problems in the development of camptothecin-based drugs.

In order to acquire low-toxic water-soluble camptothecin derivatives, certain active sites on their five-ring backbone are usually modified, such as the A, B and E rings, to improve the water solubility of camptothecin, reduce the toxic side effects and increase the stability of the lactone ring, where the most studied modification sites are the 7, 9, 10 and 20 carbon positions.

The first camptothecin derivative, 10-Hydroxycamptothecin (HCPT), was developed independently in China in the 1970s and received widespread attention due to its reliable clinical efficacy. In the 1990s, a new generation of camptothecin drugs, Topotecan (TPT) and Irinotecan (CPT-11), were successfully developed, and many similar drugs have been developed since then. 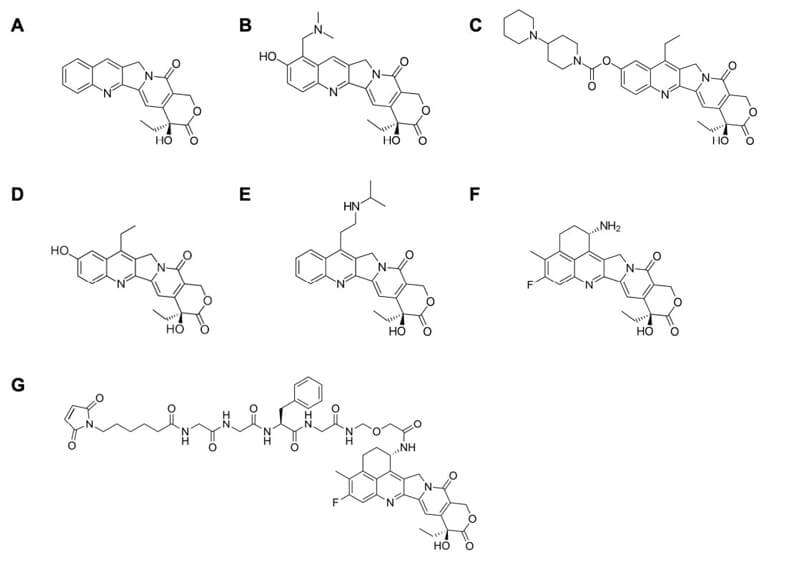 Drug delivery is widely used in the antineoplastic field to improve drug efficacy, reduce drug toxicity, and improve drug safety. Various technologies have been applied to overcome the problem of the bioavailability of camptothecin drugs, such as liposomes, antibody-drug conjugates, dendrimers and micelles, etc.

Irinotecan, a semisynthetic analog of the quinoline-basedalkaloid camptothecin, was first discovered and synthesized in Japan byYakult Honsha Co, Ltd, in 1983. It initially demonstrated strong activityagainst a broad variety of experimental tumors. Subsequently, clinical phaseI studies were initiated.  Irinotecan was approved for the treatment of cervical, lung, and ovarian cancer in Japan in 1994. In the following years, its use was approved in Europe (1995) and the USA (1996).

Liposomes are phospholipid bilayers equipped with an internal aqueous pocket and are used as drug delivery enhancers for hydrophobic and hydrophilic drugs. Liposomes provide a protective layer that shields the encapsulated drug from structural changes or chemical degradation. In addition, the covalent adhesion of PEG molecules can be used to improve the systemic circulation of the drug.

Liposomal drugs are also being developed for belotecan and SN-38 (7-ethyl-10-hydroxycamptothecin), the active metabolite of irinotecan after carboxylase conversion, which has a much greater activity than irinotecan in inhibiting topoisomerase I. LE-SN38 (Liposome-Entrapped SN38 ) is a SN-38 liposome developed by Neopharm. The core technology of this product is the use of tetraglyceride cardiolipin, which can closely interact with lipophilic drugs and stably embed into the liposomal phospholipid membrane, greatly improving the stability in vitro and in vivo, and also enabling the poorly soluble SN-38 to be injected for drug delivery.

Nanoparticle formulations increase drug solubility and prolong half-life, however, their tumor targeting efficiency remains suboptimal due to their passive targeting effect. For ADC, antibody-mediated active targeting provides selectivity and very high affinity due to specific antibody-antigen binding, which can distinguish tumors from healthy cells based on antigen expression levels. Thus, ADCs are designed to deliver topoisomerase I inhibitor specifically to tumor cells without an off-target effect. (Table 2)

Sacituzumab govitecan (Trodelvy®, IMMU-132) conjugated hRS7, a humanized monoclonal antibody targeting Trop-2, to SN-38, the active metabolite of irinotecan, via a CL2A linker. Among them, hRS7 is a humanized IgG1 monoclonal antibody with high specificity, high affinity, good stability and long half-life; CL2A linker is a cleavable linker; SN-38 is a topoisomerase I inhibitor, which is highly stable in blood and effectively avoids systemic off-target effects.

IMMU-132 is designed to undergo hydrolysis in acidic conditions similar to the tumor microenvironment, allowing for precise and efficient drug delivery release as well as bystander effects. With the dual action of antibodies and chemotherapeutic drugs, it can both precisely target and bind tumor cells with high expression of Trop-2 and release chemotherapeutic drugs to attack tumors without causing serious toxic side effects. On April 22, 2020, IMMU-132 received accelerated approval from the FDA for use in third-line and above metastatic triple-negative breast cancer, becoming the first Trop-2 targeted drug on the market.

Another ADC delivering a camptothecin drug is trastuzumab deruxtecan (T-DXd; DS-8201), developed by Daiichi Sankyo in collaboration with AstraZeneca. DS-8201 comprises an anti-HER2 antibody (trastuzumab), a cleavable tetrapeptide-based linker, and a topoisomerase I inhibitor (deruxtecan，DXd). In the presence of the linker, DS-8201 is highly stable in the blood with a very low shedding rate, which does not affect the metabolic rate and ensures stability and homogeneity. The cleavable linker makes the drug delivery process of DS-8201 simple and more efficient, as the lysosomal protease recognizes the linker site and releases the drug after entering the cell. DS-8201 can target delivery of cytotoxic agents into cancer cells, reducing systemic exposure of cytotoxic agents.

DS-8201 has several innovative features; a highly potent novel payload with a high drug-to-antibody ratio, good homogeneity, a tumor-selective cleavable linker, stable linker-payload in circulation, and a short systemic half-life cytotoxic agent in vivo; the released cytotoxic payload could exert a bystander effect. In a head-to-head comparison of DS-8201 and T-DM1 (trastuzumab emtansine), DS-8201 reduced the risk of patient progression by 72% and reduced the risk of patient death by 45% compared to T-DM1.

Starpharma, an Australian company, has been working with dendrimers for many years and has developed DEP®, a technology platform for the delivery and encapsulation of dendrimers. DEP® irinotecan is a dendrimer version of irinotecan, predominantly used for colorectal cancer. DEP® irinotecan phase 2 program is currently underway.

By the way, PEG here is the shell-forming polymer of the polymeric micelles. There are several reasons for using PEGs. First, it is non-toxic and is one of the few synthetic polymers that has been approved by the FDA for use in pharmaceutical products. Second, in an aqueous environment, PEG is highly hydrated and can move quickly, sweeping out a large exclusion volume. In micelles, PEG forms a dense, brush-like shell that extends out from the core. These properties serve to limit the interaction of micelles with other micelles (leading to aggregation) and proteins (opsonin), thus facilitating uptake and clearance by the mononuclear phagocytic system. Third, PEG can be readily functionalized to tether ligands for targeted drug delivery. This particular property has led to a great interest in the delivery of highly potent compounds, such as anticancer agents, which would benefit greatly in terms of efficacy and safety. All of the above reasons have contributed to the extensive research on polymeric micelles involving PEGs.

Drug delivery technology is a powerful tool for drug development, and the current development for camptothecin drugs is mainly focused on irinotecan and SN-38. It is hoped that with the help of drug delivery technology, more new antitumor drugs can be developed by overcoming the disadvantages of poor water solubility and inadequate tissue distribution of more camptothecin drugs.

Biopharma PEG is a professional PEG supplier. We can provide high-purity PEG linkers from milligram to kilogram scale in GMP and Non-GMP grade for your PEGylated liposomes, antibody-camptothecin conjugates and micelles development.