There has been a surge in investment in small molecule targeted protein degraders, with disclosed financing reaching more than $1 billion in 2021. In July 2021, Pfizer paid Arvinas $650 million upfront plus a $350 million equity investment to co-develop a Phase II clinical trial PROTAC degrader. In August 2021, Bayer acquired Vilivion Therapeutics for a $1.5 billion upfront payment and a $500 million milestone. Last year, Kymera announced a $2.15 billion partnership with Sanofi and listed a month later, becoming the third PROTAC company to be listed.  Currently, four PROTAC technology companies have been listed, with a cumulative market capitalization of $11 billion (as of the end of November). The tantalizing prospect of degrading disease protein targets through small molecules has spawned at least ten other biotechnologies. At least six companies have PROTAC-like molecules already in clinical trials (Table 1). 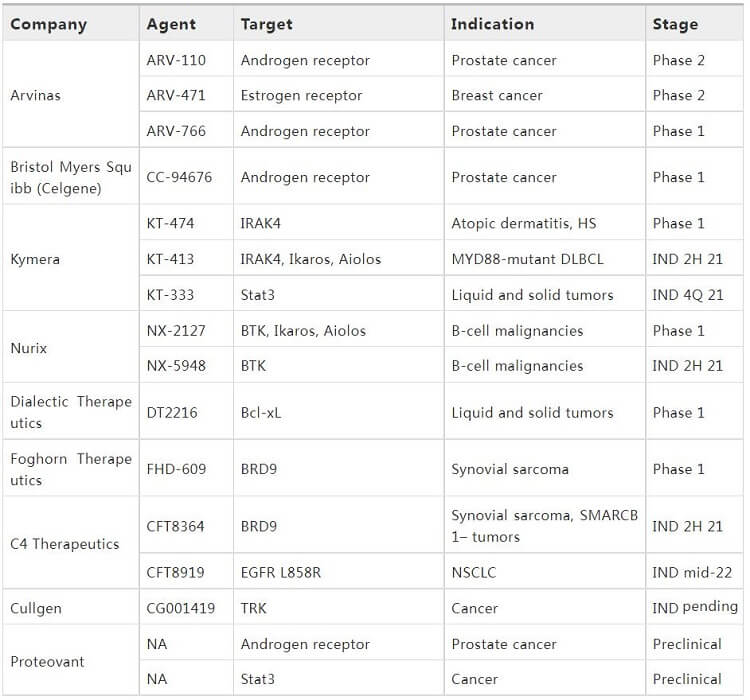 PROTAC, known as PROteolysis TArgeting Chimeras, is a heterobifunctional small molecule compound consisting of three components: a ligand of an E3 ubiquitin ligase, a ligand that targets the protein of interest (POI), and a linker connecting both moieties. Thus, the PROTAC acts as a bridge, bringing the POI into close proximity to the E3 ubiquitin ligase (Figure 1). This enables the E3 ligase complex to catalyze the ubiquitination of the target. The produced polyubiquitin chain marks the target protein for degradation by the proteasome.

Once they enter a cell, the target protein, the cellular ubiquitinylation system and the PROTAC form a ternary complex, and the recruited E3 ligase polyubiquitinates any surface-exposed lysines on the protein. This targets them for destruction by the proteasome and, once they have been eliminated, the PROTAC is released to complex with another POI molecule.

E3 ligases can be divided into families such as RING, HECT, RBR, etc., and there are other subtypes under each family. There are more than 600 known E3 ligases, but there are only four related E3 ligases commonly used as ligands in PROTAC, such as CRBN, VHL, IAP, and MDM2. There are also E3 ligases with only a few reported ligands, such as DCF15, RNF114, DCAF16, KEAP1, and FEM1B.

The ubiquitin-proteasome pathway can degrade target proteins such as cyclins, spindle-related proteins, cell surface receptors, transcription factors, tumor suppressor factors, oncogene products, and intracellular degeneration proteins and abnormal proteins under stress conditions. Target protein ligands. The current selection of PROTAC ligands is still mostly based on known inhibitors/agonists, and the targets are mostly cancer-related proteins. This indicates that the research on PROTAC is still at an early stage, and the target protein ligands can be used in virtual screening and high-throughput screening methods without considering competitive binding, while proteins related to neurodegenerative diseases and autoreactive diseases are yet to be developed.

Linker is the connecting unit between the E3 ligand and the target protein-ligand. For each PROTAC, linker parameters (chemical properties, length, hydrophilicity and rigidity, etc.) must be optimized to improve stability, bioavailability, cell membrane permeability, etc.

The common PROTAC linkers are PEG or linear alkanes, etc., which are commonly constructed by esterification, amidation, and Click chemistry reactions, etc. The later modification of PROTAC molecules is based on this by changing the chain length, introducing aryl groups to increase hydrophobicity and rigidity, adding a linker chain to limit molecular twisting, and using light conversion groups to shield the active site beforehand to improve the overall performance of the molecule. Different linker motifs have corresponding characteristics, as shown in the following figure.
Biochempeg provides multi-functionalized PEG derivatives as PROTAC linkers. The following products can act as PROTAC linkers. 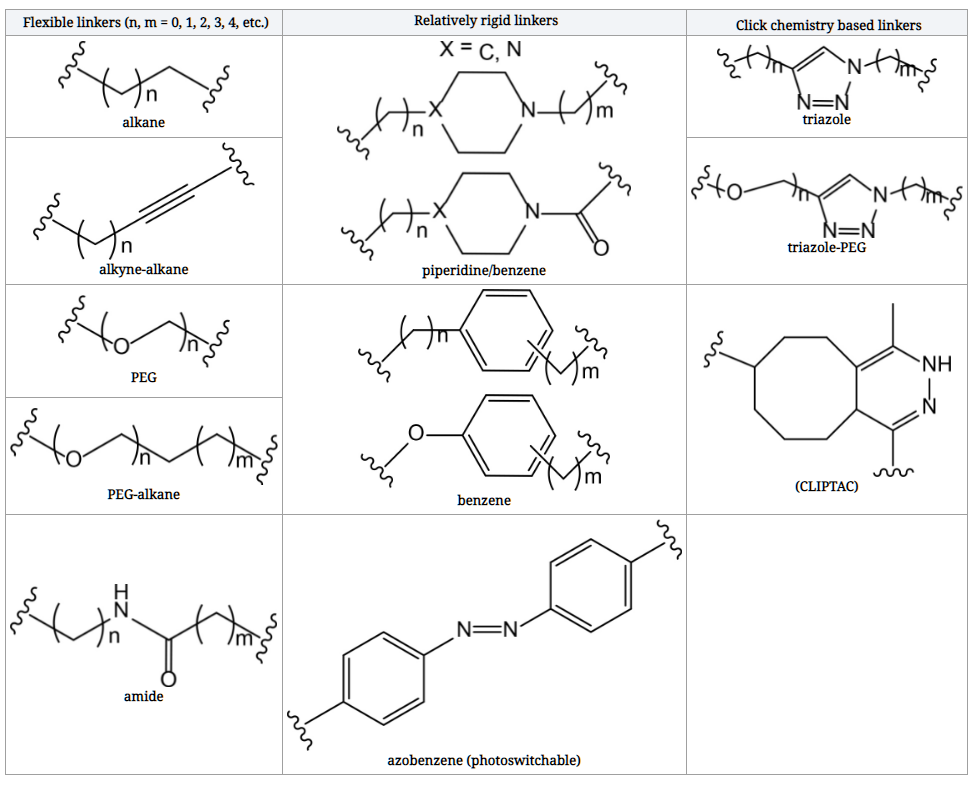 The common types of linkers are used for the design of PROTACs. Image source: https://www.explorationpub.com/Journals/etat/Article/100223

PROTACs can overcome most of the limitations of small molecule inhibitors, and they offer several advantages of the traditional concepts of drug discovery by targeted protein degradation.

Second,PROTACs have demonstrated particular sensitivity to drug-resistant targets. Traditional inhibition methods often fail to address the confirmatory changes in proteins due to mutations that lead to increased drug resistance, which is easily addressed by the PROTAC approach, where the intense-target binding is often not required to the unique MoA.

Third, PROTACs have the potential to target the undruggable targets that limit conventional drugs, as the warheads require only a slight binding affinity to recruit the POI, rather than high inhibitory activity.

Fourth, PROTACs have shown high potency. Classical drugs generally require high drug concentrations to maintain a level of target occupancy that provides sufficient clinical benefit. However, high drug concentrations are also associated with off-target effects. Since the efficacy of PROTACs is not limited by equilibrium occupancy, more than 90% reduction in protein levels can be achieved at nanomolar concentrations. In addition, they promise a more sustained reduction in downstream signaling and maintenance of response duration even after PROTAC washout. In contrast to the typical interaction of inhibitors with target proteins, which requires binding to a functional binding site and blocking the interaction of a single protein, PROTACs produce a ternary complex in which recognition is critical and potency is of reduced significance.

The chart below shows a detailed comparison of the advantages and disadvantages of the PROTACs vs small molecule drugs. 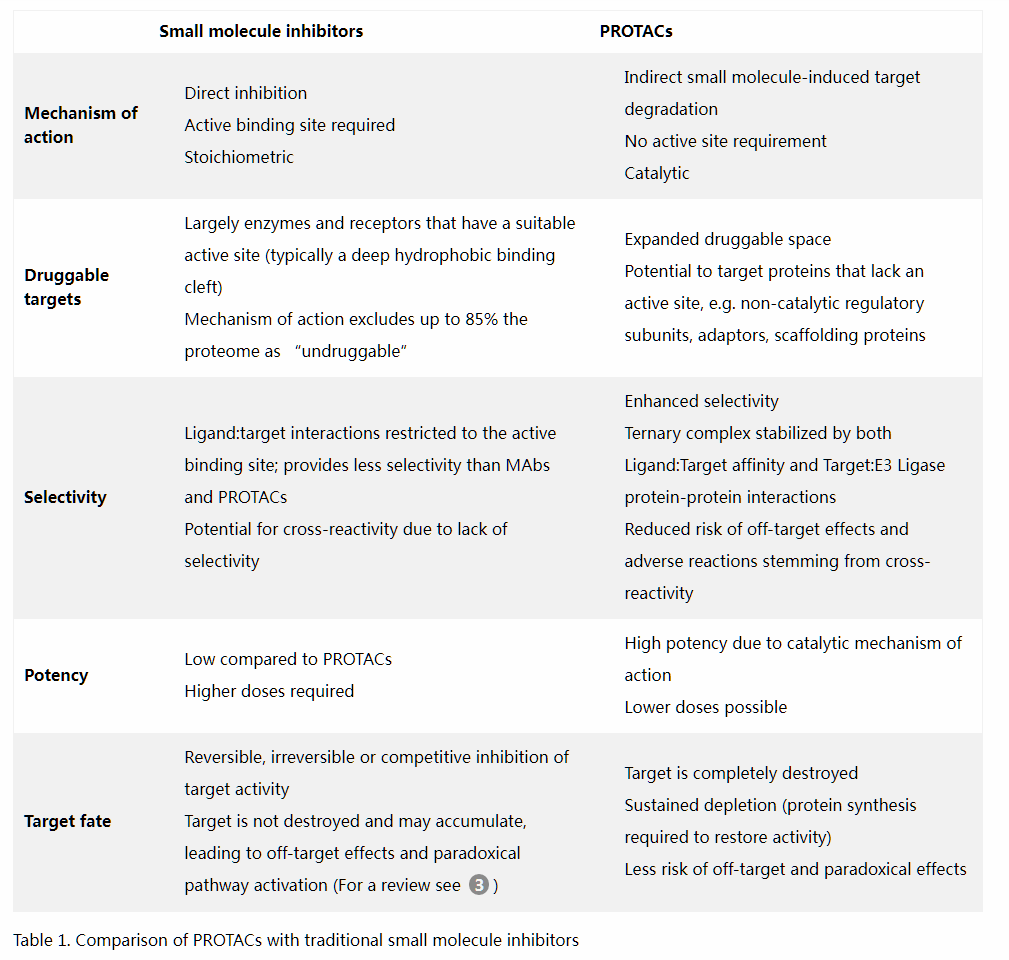 However, as research on PROTACs has increased, their limitations have begun to emerge. They are more difficult to develop than traditional small molecules, they do not readily degrade many types of proteins, their toxicology is uncertain, and their adverse effects are largely unknown. Especially, the oral bioavailability of PROTAC is low. They have a higher molecular weight (0.7-1.1 kDa), more hydrogen bond donors, and a larger polar surface area than traditional small molecules, all of which affect intestinal permeability.

PROTAC technology is currently undergoing rapid development, and it can solve the problem of the non-druggability of many target proteins. However, the problems of solubility, membrane permeability, and selectivity make the development of PROTAC a difficult process. Solving these problems may require the discovery of new E3 ligands or the innovation of Linker molecular motifs, which are both opportunities and challenges in this era.