The complement system was discovered in the late 19th century as a heat-labile plasma component that " complemented" antibodies in killing microbes, hence the name "complement". The complement system is also part of the innate immune system and plays an important role in phagocytosis of xenobiotics, removal of immune complexes and apoptotic cells, and participation in acquired immunity. In contrast, abnormalities of the complement system are closely associated with a variety of diseases such as infections, autoimmune system diseases, and tumors, etc. 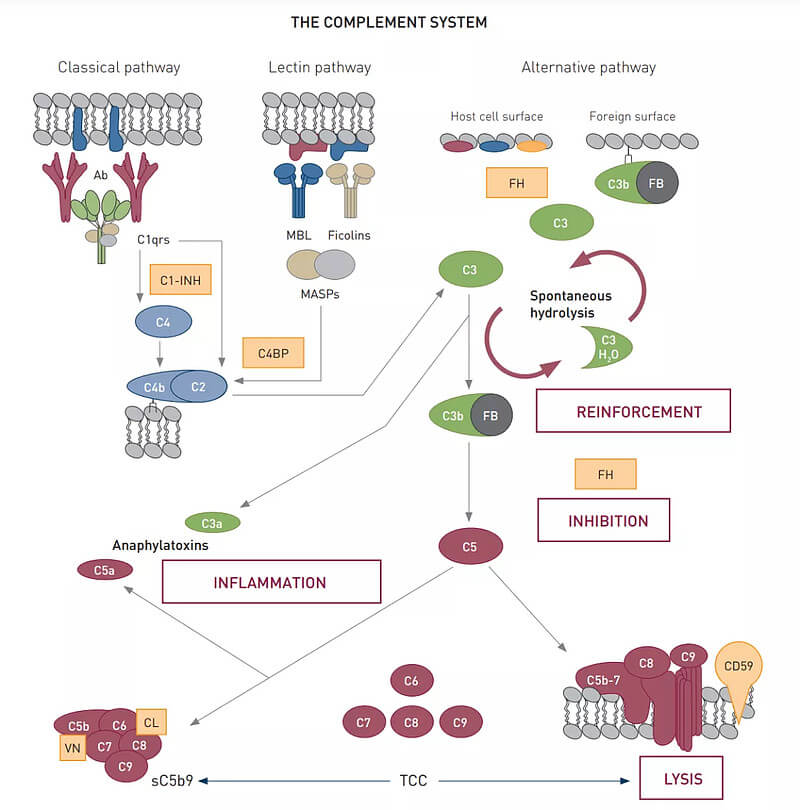 Figure 1. Targets for inhibition in the complement pathway.

Despite a long list of diseases with the potential to improve complement modulation, only a few rare diseases have been approved for clinical treatment targeting complement. Diseases currently being effectively treated include paroxysmal nocturnal hemoglobinuria, atypical hemolytic uremic syndrome, myasthenia gravis, and neuroretinitis optica spectrum disorders. 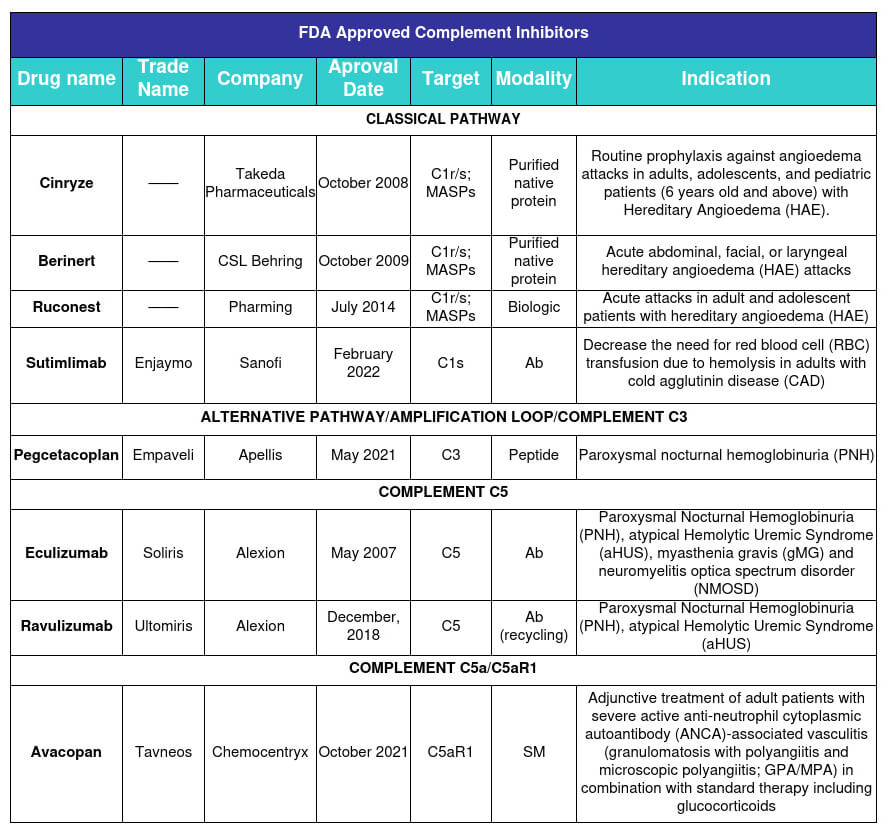 Ultomiris (ravulizumab), approved in 2018 by FDA, is an improved version of the existing blockbuster drug, Soliris. It is the first and only long-acting C5 inhibitor administered every 8 weeks in adults. Which is indicated for the treatment of adult patients with paroxysmal nocturnal hemoglobinuria (PNH) and the treatment of adults and pediatric patients 1 month of age and older with atypical hemolytic uremic syndrome (aHUS).

According to Alexion's historical financial reports, sales of Soliris have climbed each year since it was approved in 2007, reaching $4.064 billion in 2020. Sales of Ultomiris exceeded $1 billion in its second year on the market, and EvaluatePharma predicts that its sales will reach $3.43 billion in 2024. It is worth mentioning that AstraZeneca acquired Alexion in December 2020 for $39 billion, given its position in the field of complement system-mediated rare disease drugs.

In May 2021, the FDA approved Empaveli (pegcetacoplan), the world's first targeted C3 therapy for the treatment of Paroxysmal nocturnal hemoglobinuria (PNH). pegcetacoplan is a synthetic cyclic peptide conjugated to a polyethylene glycol (PEG) polymer that specifically binds C3 and C3b.

The approval of Empaveli was based on a head-to-head phase III PEGASUS  study, which showed that Empaveli outperformed Soliris for the change from baseline in hemoglobin level. Apellis is currently evaluating the efficacy and safety of pegcetacoplan in the treatment of patients with PNH, geographic atrophy (GA) and C3 glomerulopathy in several clinical studies.

On February 4, 2022, FDA approved Enjaymo™ (sutimlimab-jome) to decrease the need for red blood cell transfusion due to hemolysis in adults with cold agglutinin disease (CAD). Enjaymo is designed to selectively target and inhibit C1s in the classical complement pathway, which is part of the innate immune system. By blocking C1s, Enjaymo inhibits the activation of the complement cascade in the immune system and inhibits C1-activated hemolysis in CAD to prevent the abnormal destruction of healthy red blood cells.

In addition to the eight complement inhibitors approved above, there are several other drugs currently under investigated, such as iptacopan (Novartis), nomacopan (Akari), danicopan (Achillion), ANX005 (Annexon), Zimura (Iveric Bio) and  zilucoplan (UCB), etc. Among these drugs, zimura and zilucoplan are PEGylated complement inhibitors. 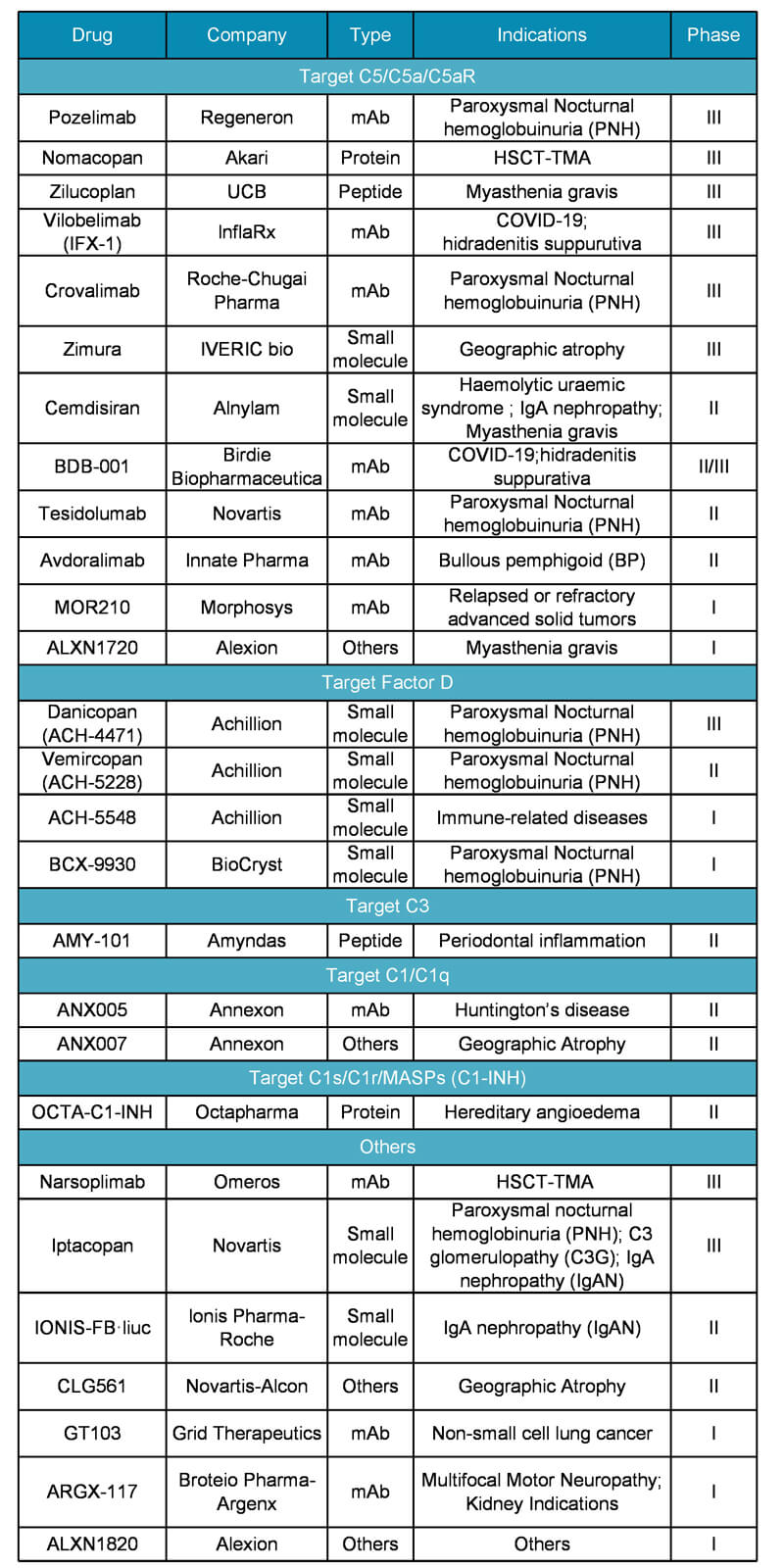 Iptacopan (LNP023) is a first-in-class, orally administered, potent and highly selective factor B inhibitor of the alternative complement pathway. In December 2020, it has been granted Breakthrough Therapy Designation (BTD) in paroxysmal nocturnal hemoglobinuria (PNH) and Rare Pediatric Disease (RPD) Designation in C3 glomerulopathy (C3G) by FDA. It is  currently in the Phase 2 clinical trials.

Nomacopan is a recombinant small protein (16740 Da), highly soluble and stable, that acts on complement C5, preventing the release of C5a and the formation of c5b-9, and also specifically inhibits leukotriene B4 (LTB4), both important components of the human immune/inflammatory response.

Danicopan regulates the bypass pathway of complement by potent and highly specific targeting of complement factor D, blocking the production of C3 convertase. Moreover, danicopan prevents the deposition of C3b fragments on patients' RBCs, controls erythrocyte catabolism, and extravascular hemolysis in PNH patients, thereby improving patient outcomes. In September 2019, the drug was granted orphan drug designation by the FDA in combination with C5 complement inhibitors for the treatment of PNH patients who do not respond well to C5 inhibitor therapy.

ANX005 is a clinical-stage investigational monoclonal antibody that potently inhibits C1q, the initiator molecule of the classical complement cascade reaction, thereby blocking the activation of the entire classical pathway, including downstream C3 and C5, while preserving the protective function of other complement pathways (lectin and alternative pathways). ANX005 is currently being developed for the treatment of autoimmune and neurodegenerative diseases. In September 2019, the drug was granted Fast Track Designation by the FDA for the treatment of Guillain-Barre Syndrome (GBS).

On the one hand, although the role of complement in the human body is widely recognized, how it mediates disease and how it affects pathogenesis is unknown. On the other hand, the complement system is a complex network of proteins with a large number of pathways that play regulatory roles. Even if one of the complement pathways is blocked, the complement system can "redirect" to another pathway through regulatory mechanisms, protecting the body from pathogens, but also eliminating the expected clinical effect of target inhibitors. Therefore, the development of drugs that effectively block the complement pathway has become a major challenge, including the selection of indications, the screening of complement system targets, and the selection of drug types (e.g., monoclonal antibodies, small molecules, peptides, etc.).

Biopharma PEG, as a leading PEG Linker supplier, provides monodispersed and polydispersed PEGs for your drugs developemnt, including complement inhibitors.