Diabetes is a major public health problem that is approaching epidemic proportions globally. Since the use of animal insulin for the treatment of diabetes in 1922, about nine major classes of drugs for the treatment of diabetes have been discovered and developed worldwide, including sulfonylureas, biguanides, α-glucosidase inhibitors, insulins, thiazolidinediones (TZDs), meglitinides, GLP-1RAs, DPP-4 inhibitors, and SGLT-2 inhibitors.

Among these nine classes of drugs, GLP-1RA lowers glycated hemoglobin levels extremely impressive among non-insulin products, and its longer half-life allows it to be administered once a week, or longer. From the current trend of clinical application, GLP-1RA drugs have become the most promising glucose-lowering drugs in the market.

In the mid to late 20th century, intestinal extracts were found to have blood glucose lowering effect. In addition, injecting glucose into the intestine was able to stimulate the production of more insulin than injecting it into the vein. These findings initiated the study of the incretin hormone. In the 1970s, the first incretin hormone, glucose-dependent insulinotropic polypeptide (GIP), was discovered, and glucagon-like peptide-1 (GLP-1), was subsequently discovered.

By the 1980s, the amino acid and gene sequences of proglucagon (Figure 1) were unraveled. It can be observed that proglucagon is not expressed by a single gene, but is embedded in a larger gene, and when this large gene expresses a large peptide chain (called preprohormones), it is then cleaved by specific enzymes and post-translationally modified to finally obtain fragments with different biological activities. Proglucagon is mainly expressed in the intestine, pancreas and hindbrain. Intestinal and brain cells contain prohormone convertase 1 (PC1), which is able to cleave proglucagon into Glicentin, Oxyntomodulin, GLP-1, GLP-2 and IP-2, while pancreatic islet cells contain prohormone convertase 2 (PC2), which capable of cleaving proglucagon into Glucagon and MPGF (Figure 1). Therefore, GLP-1 in human blood is mainly secreted through the intestine.

GLP-1 (glucagon-like peptide-1) is a hormone secreted by the intestinal tract during feeding, which enhances insulin secretion and inhibits glucagon secretion in a glucose concentration-dependent manner, and delays gastric emptying to reduce the amount of food eaten through central appetite suppression. GLP-1RA exerts its glucose lowering effect by stimulating GLP-1 receptors, which not only has significant glucose-lowering efficacy, but also has the advantage of low incidence of hypoglycemia.

In addition, because the tissues in which the GLP-1 receptor is expressed are not limited to the gastrointestinal and pancreatic glands, GLP-1RA can reduce cardiovascular risk in addition to lowering glucose and reducing body weight. These are benefits that insulin and the vast majority of oral hypoglycemic agents do not have.

Currently, there are nine GLP-1RAs approved for marketing worldwide (Table 1), mainly for the treatment of diabetes and obesity, of which tirzepatide is a novel dual GLP-1RA/GIPR agonist. 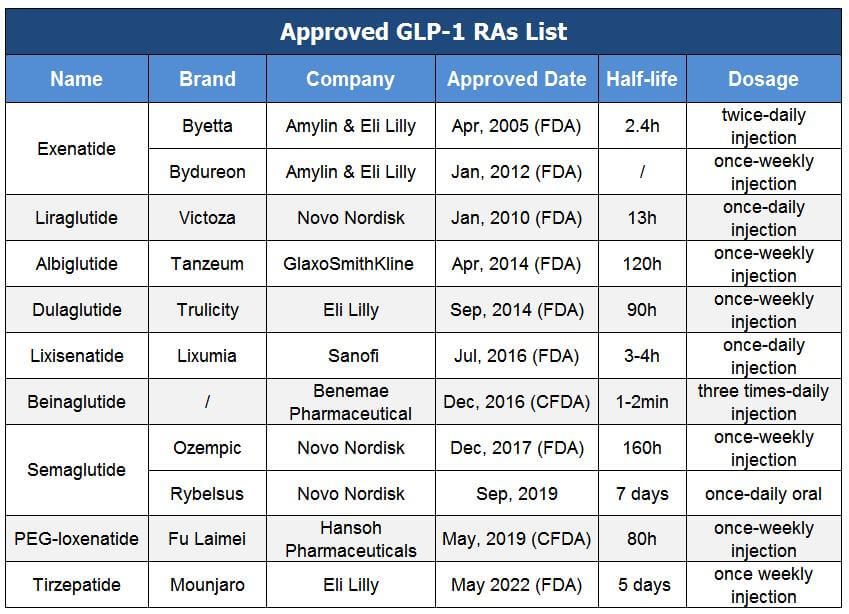 In 2005, Exendin-4 (Exenatide/ BYETTA), the world's first GLP-1RA, was approved by the FDA for the adjuvant treatment of type 2 diabetes with two injections per day (BID).

In 2009, Novo Nordisk's Liraglutide (Victoza) was approved by the EMA and in January 2010 by the FDA for the treatment of type 2 diabetes. Liraglutide has demonstrated both cardiovascular benefits in addition to its excellent glucose-lowering effects. Also, Liraglutide was the world's first once-daily GLP-1RA drug.

To address the problem of once-a-day injections of Liraglutide, Lilly launched Dulaglutide, which is administered once a week and was approved by the FDA in 2014 for the treatment of type 2 diabetes. Dulaglutide sales surged starting in 2019 and became the top seller in GLP-1RA in 2020.

In 2022, Eli Lilly launched Tirzepatide, a novel dual GLP-1RA/GIPR agonist administered once weekly by subcutaneous injection that activates both GLP-1 and GIP receptors. GIP (glucose-dependent insulinotropic polypeptide) is a hormone that may complement the effects of GLP-1 receptor agonists. Preclinical studies have shown that GIP may reduce body weight by reducing food intake and increasing energy consumption, and in combination with GLP-1 receptor agonists, may have a greater effect on patients' blood glucose and body weight.

The short action profile of native GLP-1 imposes a major challenge towards its successful clinical utilization. To overcome this limitation, various strategies have been applied to extend the half-life of GLP-1 and to accelerate its in vivo action and potency.

(1) Prevention from DPP-4 degradation. This is the most commonly used approach, and its strategy is to modify the second N-terminal amino acid position (Ala8) to protect from degradation by DPP-4. This structural modification has been applied to exenatide, lixisenatide, semaglutide, dulaglutide and albiglutide.

(2) Binding to albumin. Albiglutide (GlaxoSmithKline) is a fusion of two GLP-1 molecules with human albumin, which increases the proteolytic stability of GLP-1 and slows renal clearance, extending the half-life to 120 h. Albumin binds to the neonatal Fc receptor (FcRn) in a pH-dependent manner, thus avoiding degradation. Upon endocytosis by the endothelial cells, albumin binds to the Fc receptor (FcRn) during endosomal acidification, which sorts the intracellular trafficking of the albumin away from degradative lysosomes and back to the plasma membrane where it can once again reenter the general circulation. 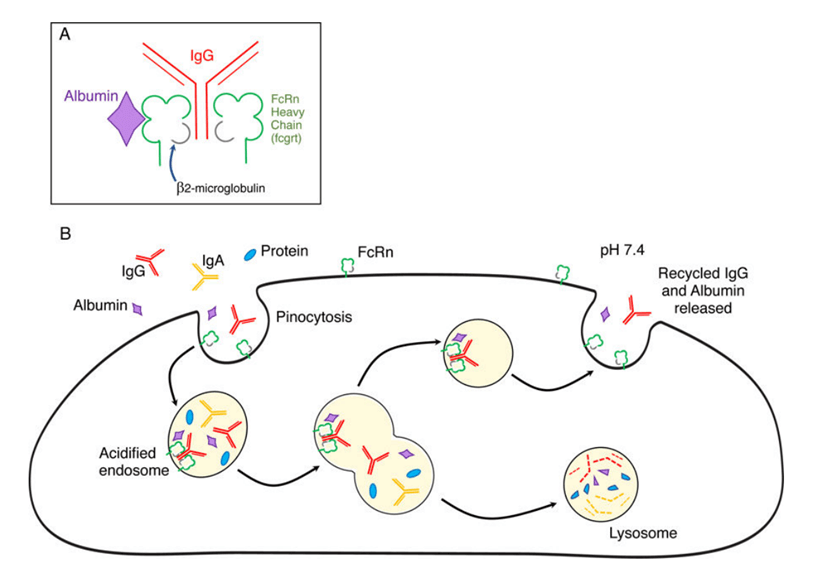 (3) Acylation with fatty acids. By fusing GLP-1 with fatty acids for acylation, the molecular self-association is promoted, thus prolonging the diffusion time of the drug from the injection site. In addition, the fatty acid fraction can be reversibly and non-covalently bound to human serum albumin (HSA), slowing down the renal clearance. This strategy has been applied to liraglutide and semaglutide  with half-lives of 12h and 160h, respectively.

(4) PEGylation. Polyethylene glycol (PEG) is a water-soluble inert polymer that reduces the renal clearance of the drug and prolongs the half-life, in addition to enhancing water solubility and preventing proteolysis. The linkage between PEG and the drug molecule can be either stable or degradable, the latter being commonly used for prodrugs. Most importantly, it does not affect the folding stability of the conjugated protein. This strategy is used for PEG-Loxenatide from Haosen Pharmaceutical.

Biopharma PEG, a leading PEG linker supplier, offers PEGylation as a cost-effective modification of peptides which has the potential to improve bioavailability compared to the nmodified molecule.

(5) Fc fusion. As already mentioned, GLP-1 fused to albumin is able to escape lysosomal degradation. In a similar way, fusion of GLP-1 with IgG can achieve the same effect (Figure 4). This strategy has been applied to dulaglutide, where two GLP-1 molecules are fused to the Fc fragment of IgG4, increasing the half-life while reducing the renal elimination due to the increased molecular weight.

(6) Sustained-release formulations. Bydureon® (AstraZeneca) is an extended release (ER) formulation of Exenatide that requires only once a week dosing. Sustained release is achieved by incorporating exendin-4 into 0.06 mm diameter biodegradable microspheres containing 50:50 poly (D,L-lactide-co-glycolide) (PLG) polymer and sucrose. In the human body, the PLG polymers slowly degrade through the non-catalyzed hydrolysis of the ester linkages into lactic acid and glycolic acid, which are finally eliminated as carbon dioxide and water.

(7) Oral formulation. We all know that peptide drugs generally cannot be taken orally because stomach acid degrades them directly, but Semaglutide has achieved a breakthrough. In Rybelsus® (Novo Nordisk), Semaglutide forms a non-covalent linkage with N-[8-(2-hydroxybenzoyl)aminocaprylate] (SNAC), which protects the peptide from degradation by enzymes and acids and accelerates its targeted release and absorption in the stomach. 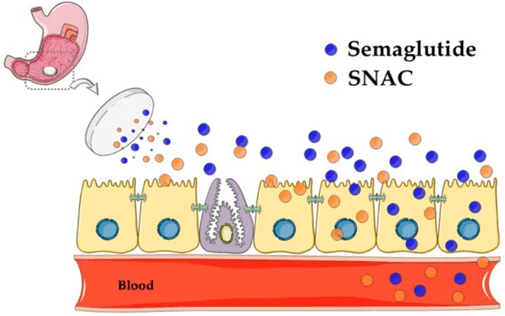 Half a century has passed since the discovery of GLP-1, which has provided a new way for humans to fight diabetes. Today, there is still a large number of GLP-1R agonists entering clinical trials, which will lead to a big explosion in the future, so let's wait and see together.