Claudins (CLDN) are a class of tight junction proteins, discovered and named by Shoichiro Tsukita et al. of Kyoto University, Japan, in 1998, which are involved in the regulation of the permeability, barrier function, and polarity of epithelial layers.

Claudin18.2 (CLDN18.2) is a member of the CLDN protein family with two isoforms, CLDN18.1 and CLDN18.2, present in differentiated gastric mucosal membrane epithelial cells. CLDN18.2 are small molecule (20-24/27 kDa) tetraspanin proteins composed of four transmembrane domains (TMDs), an N-terminus and a C-terminus in the cytoplasm and two extracellular loops (ECL1, ECL2) that span the TMDs. The expression of CLDN18.2 is tissue-specific and highly restricted in normal tissues, but abnormally expressed in malignant tumors such as gastric, pancreatic, ovarian, and lung adenocarcinomas, which can be targeted precisely and is an ideal target for cancer detection, diagnosis, and treatment. 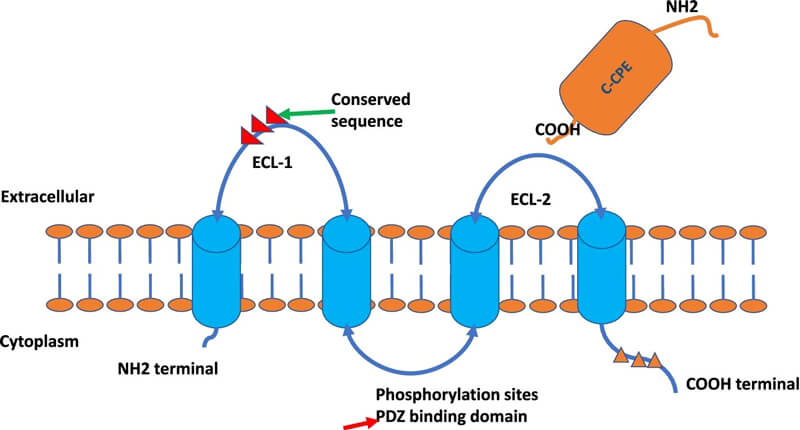 Expression and Role of Claudin in Cancer 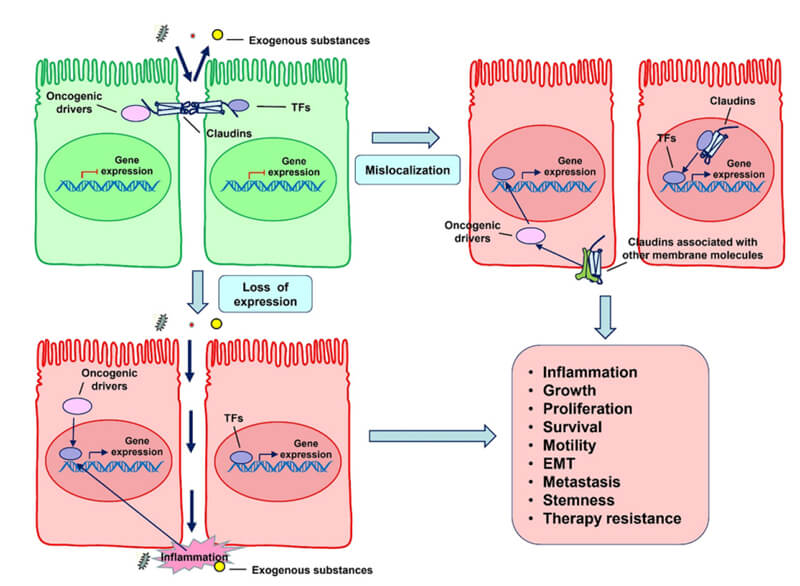 Figure 2. Schematic model of the pro and antitumorigenic roles of claudins.  Source: Reference [2]

Consistent with the various expression patterns of claudins, a role for claudins in pro- and antitumorigenesis has been reported. The precise mechanisms by which claudins suppress or promote tumorigenesis are unclear. The potential mechanism of action of Claudins for cancer inhibition may involve their paracellular barrier and signal transduction functions. Claudins prevent the passage of exogenous substances through the paracellular space in the physiological condition; otherwise, inflammation occurs, which is the most common causative agent of cancer. In addition, loss of the epithelial barrier may lead to the infiltration of growth factors into the mucosa to promote neoplastic transformation and growth.

Regarding their pro-tumorigenic effects, studies have focused on the hypothesis that claudins activate various signaling pathways or proteases to promote tumorigenesis. Outside of tight junctions, claudins are involved in signal transduction, ECM degradation and receptor cleavage through binding to other molecules, such as epithelial cell adhesion molecule (EpCAM), membrane type-matrix metalloproteinases (MT-MMPs), disintegrin and metalloproteinase 10 (ADAM10) and integrins,  leading to the activation of many oncogenic pathways. Claudins also form complexes with transcription factors (TFs), such as YAP/TAZ and β- catenin, to induce nuclear accumulation of these TFs. Through these mechanisms, claudins are thought to play a role in almost all aspects of tumor biology and in all steps of tumor development.

Currently, no CLDN18.2-targeting therapeutic agents are available worldwide, but many drugs are under investigation for cancer immunotherapy , including mAbs, bispecific antibodies (BsAbs), chimeric antigen receptor T (CAR-T) cells, and antibody–drug conjugates (ADCs). Regarding clinical trials related to CLDN18.2, as of the end of October 2022, there are more than 40 ongoing trials. Most of these trials focus on solid tumors, including advanced unresectable GC, GEJ cancer, metastatic esophageal cancer, and PC. 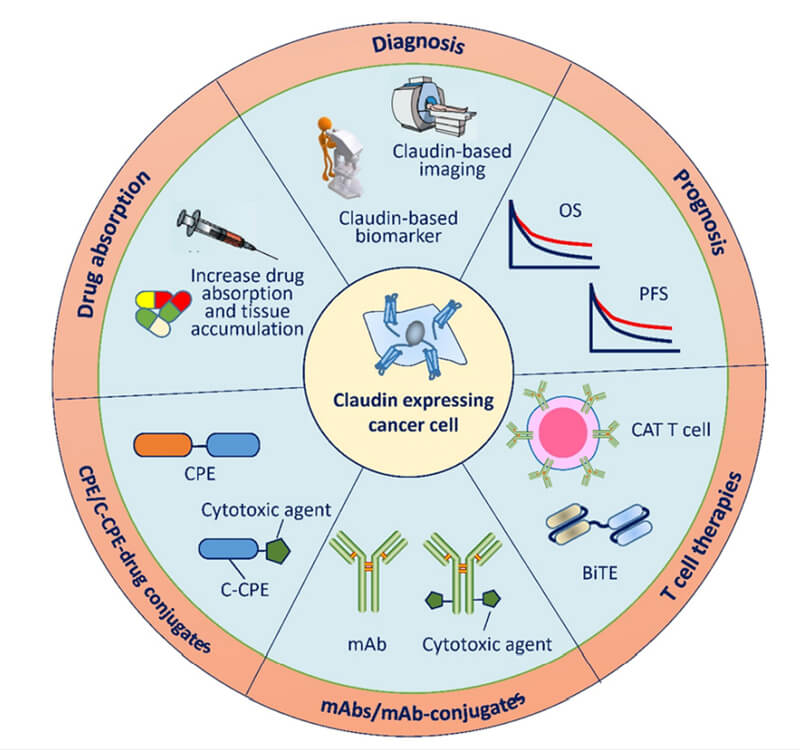 Figure 3. Clinical applications of claudin-targeting agents in the diagnosis, prognosis and treatment of cancer. Source: Reference [2]

On November 16, 2022, Astellas announced positive top-line results from the Phase 3 SPOTLIGHT clinical evaluating the efficacy and safety of zolbetuximab in combination with mFOLFOX6. The SPOTLIGHT trial enrolled 566 patients with CLDN18.2-positive, HER2-negative, locally advanced unresectable or metastatic gastric or GEJ adenocarcinoma.

In the phase II ILUSTRO trial, investigators evaluated the efficacy of zolbetuximab in combination with pembrolizumab for the treatment of patients with locally advanced or metastatic adenocarcinoma of the gastric and gastroesophageal junction. The study showed an objective remission rate (ORR) of 63.2%, a median PFS of 13.7 months, and a 12-month PFS rate of 58% in 19 evaluable patients. Common adverse events (AEs) were nausea and vomiting; grade 3 to 4 AEs were neutropenia and granulocyte deficiency. Data from this trial were published in 2021 ASCO. 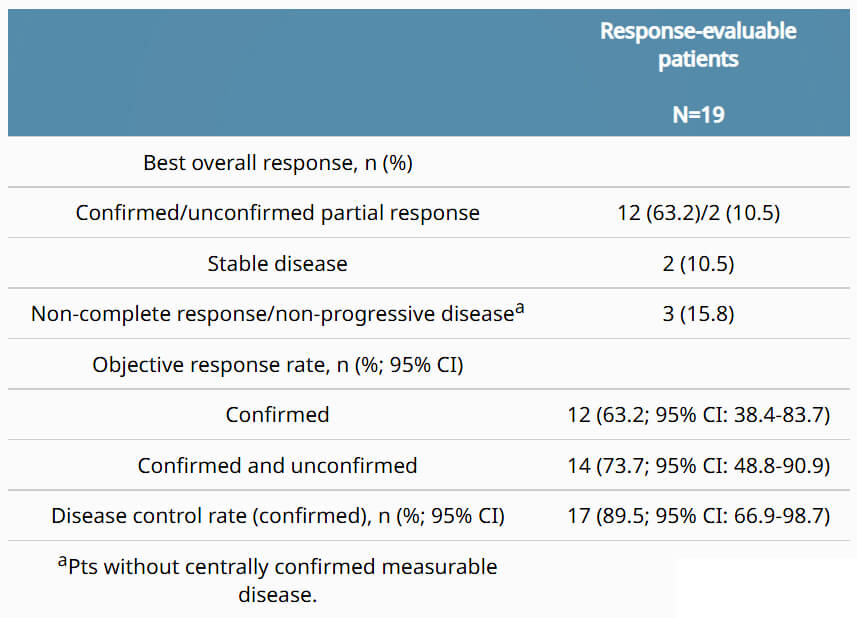 The latest data from the Zolbetuximab clinical phase II trial FAST, published in Annals of Oncology in 2021, showed that PFS and OS data for Zolbetuximab combined with EOX for gastric cancer were further prolonged compared to EOX, and in the population of patients with >70% Claudin18.2 positive tumor cells, median PFS and OS reached 9.0 months and 16.5 months, respectively, compared with 5.7 months and 8.9 months, respectively, in the placebo combined with EOX treatment group. 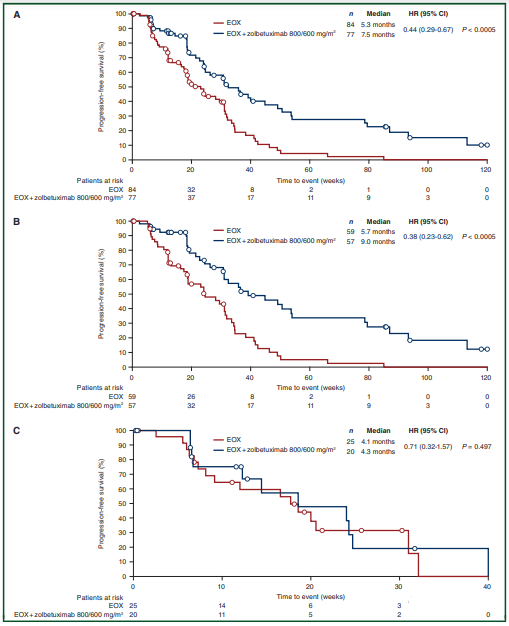 The phase I clinical study of CT041 enrolled adult patients with immunohistochemically confirmed tumor tissue expressing CLDN18.2 who had received at least one treatment for advanced gastrointestinal cancers, all of whom had developed metastases, and a total of 49 patients received CT-41 infusions. An initial 37 patients were included in this interim analysis, 28 of whom had gastric or gastroesophageal junction (GC/GEJ) tumors, 5 had pancreatic cancer (PC), and 4 had other types of digestive system tumors.

Thirty-six of the 37 patients had measurable target lesions; of these, 30 (83.3%) patients showed tumor regression. The overall remission rate (ORR) and disease control rate (DCR) in this study reached 48.6% and 73.0%, respectively, with a median progression-free survival (mPFS) of 3.7 months and an overall survival (OS) rate of 80.1% at 6 months for all patients. Gastric cancer patients achieved ORR and DCR of 57.1% and 75.0%, respectively, with an mPFS of 4.2 months and an overall survival rate of 81.2% at 6 months. 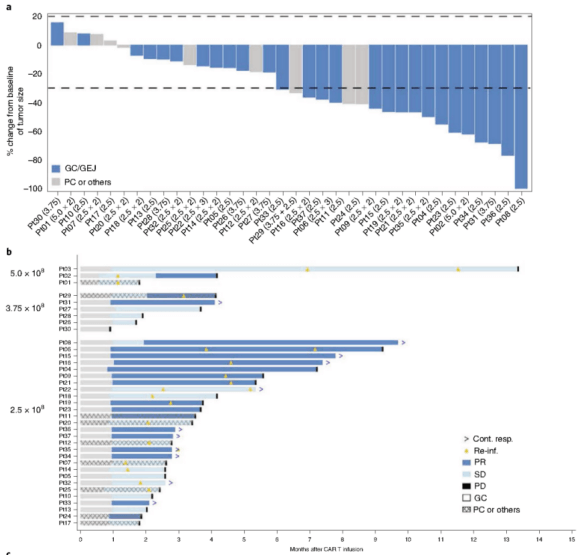 ​In April 2022, KeyMed Biosciences Inc announced that CMG901 for the treatment of recurrent/refractory gastric cancer and adenocarcinoma of the gastroesophageal junction has been granted orphan drug designation and Fast Track Designation (FTD) by the U.S. FDA. A Phase I trial for patients with advanced solid tumors is currently underway to evaluate the safety, tolerability, PK and initial anti-tumor activity of CMG901 in a dose-escalation phase and a dose-expansion phase.

First, CLDN18.2 may be the second most important target for gastric cancer after HER-2. It even surpasses HER-2 in highly expressed populations. The efficacy of OS in the FAST trial was no less than that of HER-2. Further studies are needed to determine the ideal cut-off value for CLDN18.2 levels for optimal benefit.

CLDN18.2 is a promising target in patients with HER-2 negative gastric cancer, not only in terms of selectivity but also in terms of population prevalence, making it an ideal complement to targeted therapies for gastric cancer. The novel antibody zolbtuximab, either as monotherapy or in combination with chemotherapy, has shown remarkable superior efficacy and safety. CLDN18.2 CAR-T cell therapy has also recently explored another possibility with its excellent performance. This strategy will progress to phase III clinical trials, and when combined with other therapies, will likely further enhance efficacy. As the molecular structure and clinical trials continue to improve, anti-CLDN18.2 therapy will perfectly answer all kinds of questions and bring more surprises in the future.