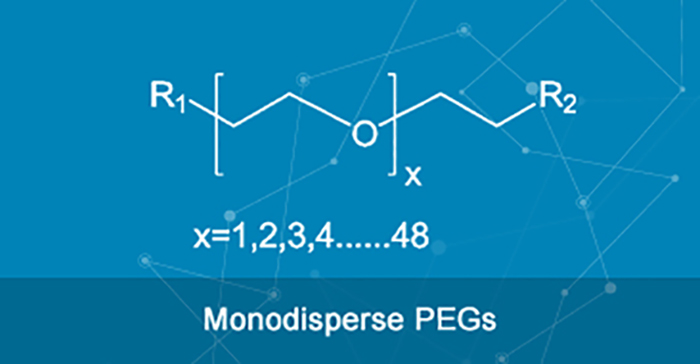 Polydisperse PEGs are ubiquitously used in the pharmaceutical industry and biomedical research. But it's researched that the use of polyPEG linkers in drug development has led to problems in biological applications due to steric hindrance and binding.

However, with advancements in both synthetic and purification chemistry over the past two decades, the monodispersity in PEGs plays an important role in the development of safe and effective drug design, especially in PEGylated small molecular drugs. Small molecules have some limiting characteristics in their clinical applications, such as low water solubility, nonspecific biodistribution, and lack of targeting as well as low therapeutic indices. The introduction of monodispersed PEG linkers to small molecule drugs increases the drug's solubility and molecular weight. The potential benefits of small molecular weight PEG technology are:
Pharmaceutical companies such as NEKTAR and AstraZeneca have made use of attached PEG linkers to small molecule drugs. OBD and OIC medications such as Movantik (naloxol) incorporate monodispersed PEG linker (m-PEG7 linker) to prevent the drug molecule from crossing the blood–brain barrier and interfering with analgesia. Yet the technique allows naloxol to bind to the mu receptors in the GI tract to mitigate the undesirable effects of opioids.

Another application is to use monodispersed PEGs on diphenyhydramine to treat allergic rhinitis. The allergic-rhinitis market is a $6.7-billion segment with a large unmet market need. The most effective antihistamines make patients drowsy, and those that are nonsedating are not strong enough to meet the needs of all patients. Preclinical data show that PEGylating diphenyhydramine dramatically reduces the concentration of the drug in the CNS compared with the native molecule, while retaining the antihistamine activity. The molecule is currently in preclinical studies.