The Difference Between Monodisperse and Polydisperse Polymers

Polymers consist of repeat units (monomers) chemically bonded into long chains.  Chain length is often expressed in terms of the molecular weight of the polymer chain, related to the relative molecular mass of the monomers and the number of monomers connected in the chain.

What Is Monodisperse Polymer?

Monodisperse polymers are uniform polymers in which all molecules have the same degree of polymerization or relative molecular mass. The polymer has a polydispersity index (PDI, a measure of the broadness of molecular weight distribution of a polymer) equal to 1. Many biopolymers, especially proteins, are monodisperse.

What Is Polydisperse Polymer?

While, polydisperse polymer is non-uniform and contains polymer chains of unequal length, and so the molecular weight is not a single value - the polymer exists as a distribution of chain lengths and molecular weights. Man-made polymers are always polydisperse particles. The best controlled synthetic polymers (narrow polymers used for calibrations) have PDI of 1.02 to 1.10. Step polymerization reactions typically yield values of PDI of around 2.0, whereas chain reactions yield PDI values between 1.5 and 20.

How About the Difference Between Monodisperse and Polydisperse PEG?​

PEG is non-toxic, FDA-approved, usually nonimmunogenic, and is often used in many biomedical applications including bioconjugation, drug delivery,  surface functionalization, and tissue engineering. Bioconjugation with PEG (also called PEGylation) is the covalent conjugation of drug targets such as peptides, proteins, or oligonucleotides with PEG which can effectively improve their water-solubility and circulation half-life of medicines, resulting in enhanced safety and therapy effects.  In drug delivery, PEGs can be used as linkers for antibody-drug conjugates (ADCs) or as a surface coating on nanoparticles to improve systemic drug delivery.

At present, most of the PEG compounds supplied on the market are polydisperse PEGs, which can help increase drug half-life and lower clearance rates. This also lowers the required dosages. Recently, polydisperse PEGs in PEGylated lipid nanoparticles (LNPs), such as mPEG2000-DSPE or PEG2000-DMG, have gained international attention for their use in the COVID-19 mRNA vaccines. PEG lipids prevent liposomes from clustering together and control the size of liposome particles, thereby preventing liposomes from being detected by the human immune system. 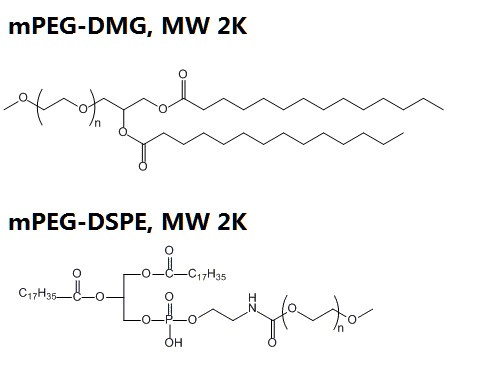 According to some researches, the use of polydisperse PEG linkers in drug development has led to problems in biological applications due to steric hindrance and binding. Thus, monodispersed PEG linkers have become more commercially viable now, which has been found to be beneficial in drug design, specifically in small molecule drugs and ADC drugs. The introduction of monodispersed PEG linkers to small molecule drugs increases the drug's solubility and molecular weight, which extends drug half-life in the body.

Related Articles:
What are the Uses Of PEG Derivatives & Polyethylene Glycols (PEGs)​
FDA Approved PEGylated Drugs 2021
PEGylation of Small Molecule Drugs
Things About PEGylation Technology and Biopharmaceuticals You Should Know​